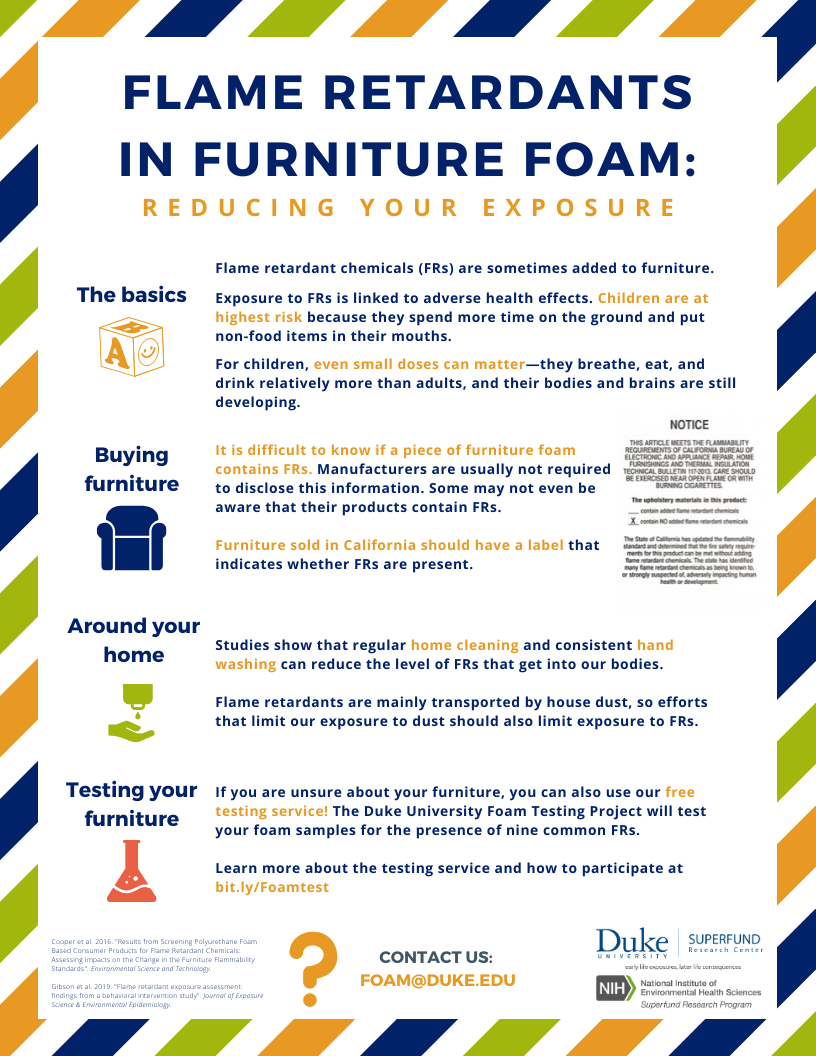 Below you will find summaries of the 9 Common Flame Retardant Chemicals we’re looking for in the samples submitted to our laboratory. The summaries include links to related websites and documents created by agencies like the EPA and the Agency for Toxic Substances and Disease Registry.

Knowing which flame retardants may be in your furniture is just a first step – reducing exposure to these chemicals is the next step (see fact sheet at the top right). So how can we reduce how much of these chemicals we come into contact with on a daily basis?

Remember that small children spend more time on the floor (where dust can accumulate) and put their hands and fingers in their mouths more often than older children and adults. This hand-to-mouth contact could be a key source of exposure.

PentaBDE is a commercial flame retardant mixture containing brominated chemicals called PBDEs (polybrominated diphenyl ethers). PentaBDE has been used for decades in residential furniture, but due to concerns over their persistence, ability to accumulate in humans, as well as their potential toxicity, the US began a phase-out of pentaBDE in 2005.

For more information on PBDEs, including pentaBDE, read the ToxFAQs summary created by the US Agency for Toxic Substances and Disease Registry.

TDCPP, or tris (1,3-dichloro-2-propyl) phosphate, is an organophosphate flame retardant that is being used to replace PentaBDE. TDCPP, which is used as an additive flame retardant in resins, polymers, latexes, and foams, is most widely used in the US (annual estimations are 4,500-22,700 metric tons).[1] There is evidence that TDCPP is a probable carcinogen and a developmental neurotoxicant[2], as well as an endocrine disruptor in fish.

For more information on TDCPP, read

TCPP is very similar in structure to TDCPP (see above) – it’s used as an additive flame retardant in resins, polymers, latexes, and foams, and is most widely used in the US (annual estimations are 4,500-22,700 metric tons).[3] As a relatively new FR additive, little is known about possible health effects. However, TCPP may cause cancer and accumulates in the liver and kidneys.[4]

Firemaster® 550 (FM 550) is a mixture of brominated and organo-phosphorous flame retardants. It was advertised as a replacement for pentaBDE following its phase-out. Other than some limited testing carried out by the manufacturer, little information on the health effects of Firemaster 550 is available. However, a recent study conducted by researchers at Duke University and NC State found that some of the components in FM 550 bioaccumulate and act as an endocrine disruptor. FM 550 may also cause obesity, metabolic disruption, and increase the onset of puberty.

For more information,read this press release from NC State University on the 2013 study of Firemaster 550 by Patisaul et al. (2013), with coauthor Dr. Heather Stapleton. You can read the full study online at PubMed.

Firemaster® 600 (FM 600) is a mixture of prominated and organophosphorus FRs. It is advertised as a replacement for pentaBDE. Other than some limited testing carried out by the manufacturer, little information on the health effects of Foremaster 600 is available.

V6 is a chlorinated organophosphate flame retardant mixture. One particular FR which occurs in V6 as an impurity is tris(2-chloroethyl) phosphate or TCEP. TCEP, which is grouped with other phosphate ester FRs sucg as triphenyl phosphate (TPP) and TDCPP, is considered a carcinogen.

TBPP, or Tris-isobutylated triphenyl phosphate, is a mixture organophosphate flame retardants that do not contain halogens (e.g. bromine or chlorine).  About 40% of the TBPP mixture is a chemical called triphenyl phosphate (TPP), and TBPP is found in commercial flame retardant mixtures.[5] Limited data exist on the health impacts of this mixture, but scientific studies have shown that TPP can have high acute aquatic toxicity. EPA conducted a risk characterization for TBPP in 2008, but that document is no longer available online.

ITP, or isopropyl triphenyl phosphate, is an organophosphate FR chemical that is also used in hydraulic fluids and as a plasticizer. The name, ITP Mix, means that there are variations in the chemical shape of the ITP compounds that can affect how they react. Research at Duke University has found that ITP compounds in the FR mixture FM550[6] and other flame retardant mixtures.[5] Research in human cells has found that organophosphate FRs are carcinogenic and can damage immune, neurological, and developmental systems.[7]

MPP, or methyl phenyl phosphate, is a mixture of organophosphate flame retardants that do not contain halogens (e.g. bromine or chlorine).  Triphenyl phosphate (TPP) is also a primary component in MPP (see above for more information on TPP).  Little information is available on the toxicity and levels of exposure to chemicals found in this mixture.

On Monday, September 26, 2016, Dr. Heather Stapleton and Dr. Ellen Cooper, with the support of the Duke Superfund Research Translation Core, held a webinar for participants and parties interested in our furniture foam flame retardant (FR) screening study.  The purpose of this webinar was to update study participants on our current research findings, answer frequently asked questions, and share methods for reducing personal exposure to FRs.  The event was well attended, with over 180 people tuned in to the webinar, including representatives from government, industry, and academic and non-profit organizations.